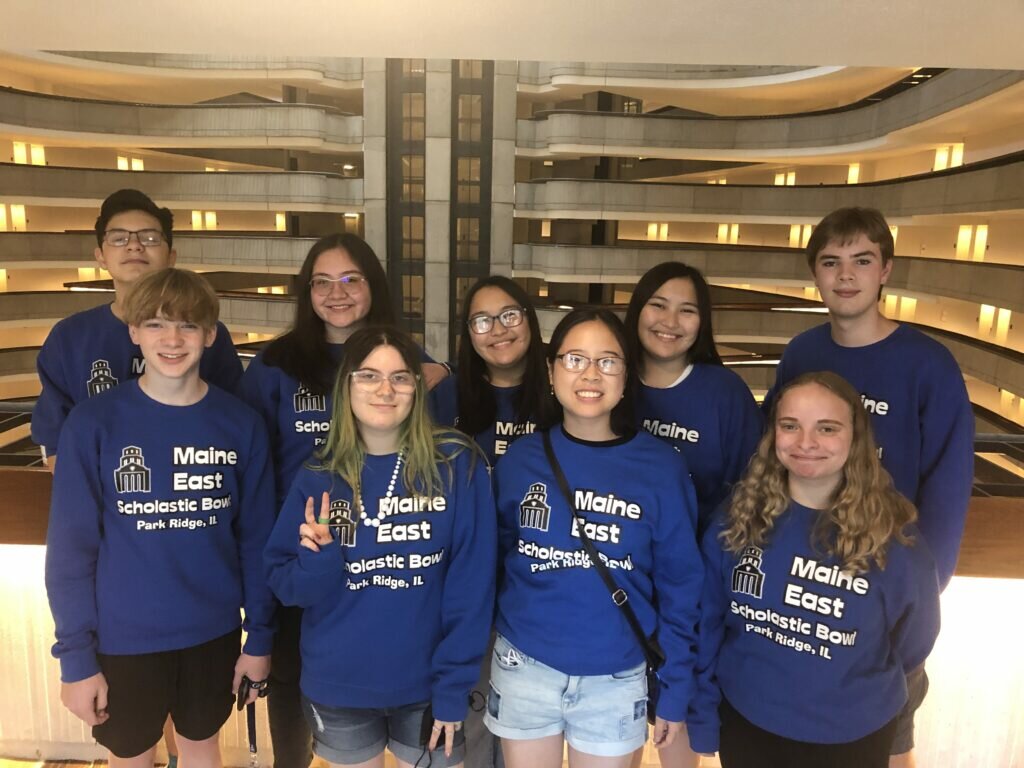 On the weekend of Saturday, May 28, Maine East High School joined 271 of the top high school quiz bowl teams from 34 states at the Atlanta Marriott Marquis for the 2022 High School National Championship Tournament.

The team was captained by Kelly Tsogtjargal and Stella Tsogtjargal, who were joined by Evelyn Alsop, Aleksandar Bargoz, Alexander Henricksen, Talia Lasky, Henry Morrison, Sarah Phan, and Katie Ruhnke. Owen Doak is the head coach and is assisted by Jan Wieczorek.

Maine East was one of 16 Illinois teams competing at the national championship.

Maine East finished the preliminary rounds with a 5-5 record. There were some tense moments. Maine East defeated Thomas Jefferson Classical from Mooresboro, North Carolina by the narrow margin of 230-210 during round 3 and suffered a heartbreakingly narrow loss to St. Vincent-St. Mary from Akron, Ohio, 165-145 during round 7. It was that loss that ended Maine East’s shot at the playoffs.

Quiz bowl is a competitive, academic, interscholastic activity for teams of four students.  It is the national version of the game that is often locally called Scholastic Bowl.  Quiz bowl teams use buzzers to answer questions about science, math, history, literature, mythology, geography, social science, current events, sports, and popular culture.  The matches feature a blend of individual competition and team collaboration, since no individual player is likely to be an expert in all subject areas.  Participation in quiz bowl both reinforces lessons from the classroom and encourages players to develop new intellectual interests.

“I am extremely proud of this extraordinary team,” says Doak. “They worked hard all year long starting back in mid-September. These kids represented the Maine East community extremely well on the national stage. They played with dignity and poise. Including consolation matches we had a winning record of 9 wins and just 5 losses in the toughest tournament of the year! We are very grateful to all of our generous donors whose financial support made this trip possible.”